Home Archives Profile Subscribe
Is a Hot Dog a Sandwich?
The Gem

Come, my friends,
'T is not too late to seek a newer world.

The words of Tennyson popped into my head today as I pondered the Confederate flag I saw flying in the village of Ithaca, Nebraska. I'm always puzzled by Confederate flags in states which fought to save the Union. No question that the person flying such a flag intends to be offensively, in-your-face a white supremacist, right? Part of me would be curious to interview such a person and ask them about their choices. But I don't think I have the temperament for it.

I thought of Tennyson because the poem is from Ulysses about the aged hero who was King of Ithaca. Surely the person flying this flag was violating something essential about the character of a town that would name itself Ithaca. Ithacans should not be afraid of a new world, right?

But, there are these great lines also from the close of the poem that maybe register something of the rebel impulse?

Tho' much is taken, much abides; and tho'
We are not now that strength which in old days
Moved earth and heaven, that which we are, we are;
One equal temper of heroic hearts,
Made weak by time and fate, but strong in will
To strive, to seek, to find, and not to yield.

Ithaca (Nebraska that is) clearly has seen better times. There isn't even a railroad track where it appears one once was. It's even a mile off the minor state highway that runs by it.

Earlier in the afternoon I had been driving west on Highway 92 and there were a number of small anti-abortion billboards in pastures along the roadway. These dot the heartland, of course. They've always puzzled me. That person I'd definitely like to interview, not on their views of abortion, but why they erect such a sign and have they ever considered that such signs might be emotionally harmful to people? That such signs strike me as unkind and uncompassionate. How would they react to hearing that from someone?

One of the times I was stopped today in a line of cars at a construction zone an apparatus used for center pivot irrigation was pointed toward me in such a way that it appeared momentarily like the skeletal remains of a prehistoric lizard.

I was getting a poor cell phone signal most of the day. After having gotten the airbag recall finally taken care of on the Corolla and done some shopping, I decided for an afternoon jaunt to Saunders County west of Omaha. The landscape could be in a Cather novel or the Nebraska locations Stephen King uses.

I wasn't quite west enough for the landscapes in Ted Kooser's poetry, but I was in an area of German, Swedish, and Czech settlement. Wahoo has a very large Catholic Church and a tiny, aged Congregational Church.

I'd never been to Wahoo. Like many smaller Nebraska towns it surprises you with how well it is doing. Surprises because coming from Oklahoma many smaller towns show little signs of economic activity. Those do exist here, though. Ithaca, being a prime example. 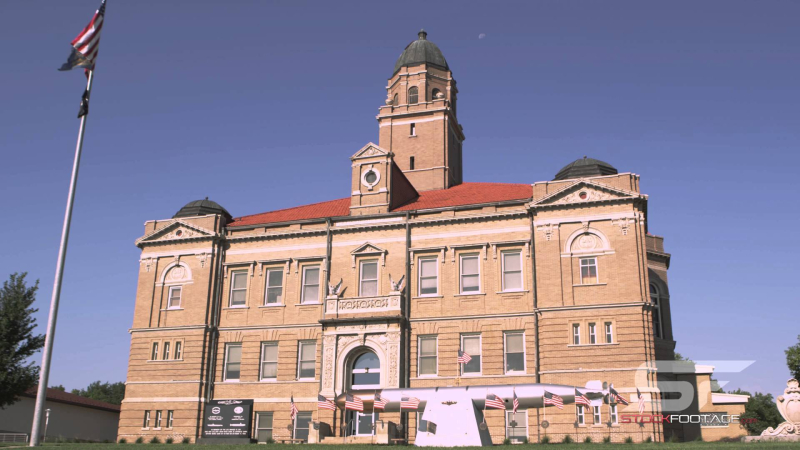 Wahoo, however, has a grand and gorgeous county courthouse—as many counties in the Plains do. Well-appointed and well-maintained Victorian homes lined the streets near the busy business district where the banks were still in buildings that look like banks. I was surprised by a vast area of large, ugly, and new suburban style developments south of town. Despite their ugliness, a sign of some economic activity.

The Saunders County Historical Museum was a disappointment. I have a weird fascination with county and small town historical museums. I particularly recommend the Lincoln County Historical Museum in North Platte, Nebraska, the Old Greer County Museum and Hall of Fame in Mangum, Oklahoma, and the National Route 66 and Old Town Museum complex in Elk City, Oklahoma. The latter, in its agricultural and blacksmith display has an excellent exhibit on wrenches. Michael uses this statement often to make fun of me. It is not that I have an abiding fascination with wrenches. I was unaware until seeing that exhibit that I could enjoy them.

Most such museums have a series of outbuildings—a one room school house, a settler's cabin, an old church. The ones in Saunders County were padlocked, making for a rather disappointing museum.

All such museums are also works of love and civic pride by mostly elderly people. The time, care, and affection are evident. Saunders County does have some notable hometown kids to highlight—Oscar-winning producer Daryl Zanuck, Nobel-prize winning geneticist George Beadle, Hall of Fame baseball player Sam Crawford, and Pulitzer-prize winning composer Howard Hanson. A Zanuck Oscar is even on display.

I was surprised that there was no David Letterman Home Office display.

What did not disappoint was lunch at the Wigwam Café. I had to order the unique "Grilled Cheeseburger Stacker" described on the menu as "1/3 pound burger sandwiched between two creamy grilled cheese sandwiches." I also couldn't resist a piece of the beautiful looking and quite delicious tasting banana cream pie.

In 2004 after the disastrous election—disastrous for the country and for LGBT people—I decided to drive to Oklahoma City from Dallas for Thanksgiving on the highway going through small towns instead of on the interstate. I did so because I was puzzled by my own people who had shocked me by their votes. I grew up a small town Oklahoma boy (I joke with Michael, quoting Marie Osmond, "I'm a little bit country"). I had even been a Republican for quite a while, so I didn't understand how I could see the world so differently than my own people did. And I was puzzled where the kindness, the fairness, the basic decency valued by those people had gone.

Unfortunately I had no major epiphanies on that drive. I did, however, see the decline of those small towns and wondered if they were struggling to hold fast to a world that no longer existed instead of embracing the new.

As I drove west on Highway 92 this morning into a rich rural landscape dotted with anti-abortion signs and center pivot irrigation apparatus, I was listening to NPR and an interview with Don DeLillo speaking on the City Arts and Lectures noon forum from the Commonwealth Club of California. He had been introduced as a novelist who captures the paranoia of contemporary life.

Reading White Noise in Joe Hall's freshman English class at Oklahoma Baptist University had, in some way, awakened me from my dogmatic slumber and introduced me to postmodernism. Maybe something happened to me in 1992 to make me different, make me more likely to follow the call of the mythical Ithacan king.

Come, my friends,
'T is not too late to seek a newer world.

The comments to this entry are closed.