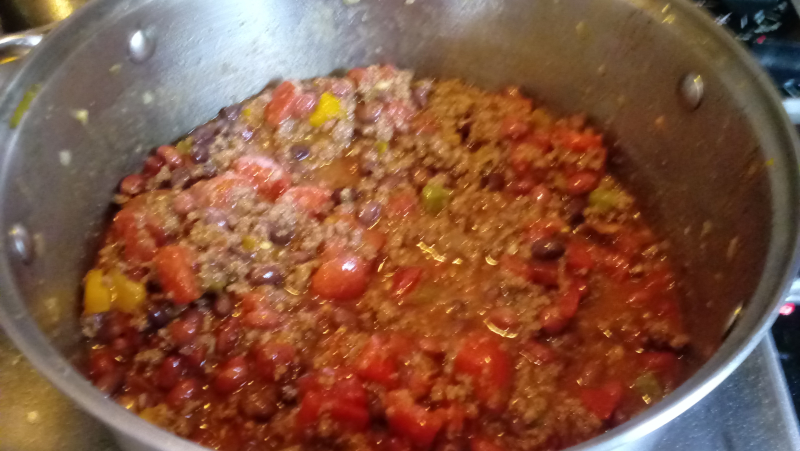 I enjoy making chili. I enjoy making it at home or for friends or for church meetings.  I just enjoy it.  Sorry I didn't realize that photo was out of focus till I went to upload it!

And chili truly is one of those dishes that reveal foodways, as it becomes a mix of influences.

As my Mom writes, "Your dad loved to make his chili."  Dad's was notoriously spicy.  One time he fixed chili for the men's group in his young adult Sunday school class.  He used six cans of Rotel and half a bottle of Tabasco.  He had it cooking all afternoon and was very excited about it.  When the men showed up, they couldn't eat it and ordered pizza.

But Dad had this thing for hot peppers.  I remember watching him and my Mom's Uncle Frank try to out-man each other by eating hot peppers and acting like they weren't hot all the while turning beet red and sweating.  Michael says his Mom ate habaneros like candy, so I know that Ninfa and Dad would have enjoyed each other. 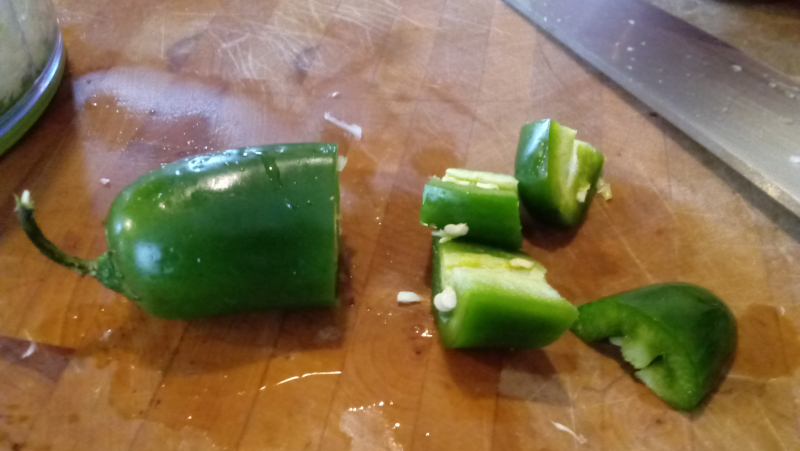 My chili is not so hot.  And has gotten a little more tame since living up here in the north country where Midwesterners seem adverse to spice.  Every year at our church people bring garden produce and lay it out during coffee hour and anyone can take it for a donation that then goes into our hunger ministries.  You can almost guarantee that any hot peppers you leave on the table will be there till they have to be thrown away.

Growing up our chili was always ground beef based and did not include beans.  Since I did not like beans then, that was fine with me.

One of our favourite places to eat was Spaghetti Red's on Main Street in Joplin, Missouri where they served spaghetti topped with a delicious, unique chili.  That you then topped with fresh sliced white onions and dill pickle slices.  Gosh, I miss that meal.

One of my college roommates had lived in the Southeast where they put chili on rice.  I thought that odd when I first encountered it, but rice with chili has become one of the many ways I'll make or serve it, if I'm so inclined.

In grad school at OU one of our secretaries gave me a recipe for a Cowboy Chili she made using a bunch of canned beans and veggies.  I don't make that particular recipe very often these days (though I once made it a lot), but elements of it have entered into my standard chili making.  This is when I finally started using beans.

The brand Bear Creek has the best chili mix, if you want to make some tasty chili quickly.  Their recipe does not call for adding ground beef, but I do anyway.

Of course living in Texas helped to perfect my seasonings and use of veggies. That's where I learned to put fresh slices of avocado on top of chili.  When I served it that way once to some friends here in Omaha, one said, "I never saw that before, but makes sense."

I remember one time listening to an NPR show discussing influences of Mexican cuisine on American cooking and they discussed chili as one of the best examples.  I had never until that moment even realized the foodways of chili--that it is, of course, chili con carne, a Mexican dish widely and deeply adopted as a staple of American traditional cooking.

Here in the Midwest there is a tradition of eating cinnamon rolls with chili.  That surprised us when we first encountered it.

This is one of those dishes for which there is no recipe.  But here's my normal plan, which I vary depending on the mood, what I have, and the food preferences of those I'm fixing it for.

Saute chopped garlic, onions, and jalapeno peppers in some canola oil.  Begin adding your spices--chili powder, turmeric, cumin, and cayenne.  You have to keep adding spices at various other stages in the dish.  You have to use your sense of smell to know when you've got it right.

Add some bell peppers of more than one colour (bright vibrant colour is important in the dish).  Sometimes add mushrooms, particularly if this is a veggie chili, but even good in beef chili.  Oh, and I like my veggies chunky.  I prefer a chunky to a soupy chili.  Let those veggies soften and then add your beef to brown.  You want the beef to cook off the juices and get a little brown and crispy, so let it cook slowly with attention and occasional stirring.  When the beef is in the pot is another time you'll need to add some spices.

Then I add the tomatoes.  Either fresh chopped tomatoes or cans of diced tomatoes. I don't use cans already seasoned, as I prefer to do the seasoning myself.  Use the liquid.  If you use fresh then you'll need to add some liquid at this point.  A little beer can add some nice flavor as well.

Then I add the cans of beans, usually at least two cans, one of red beans and one of black beans.  Though you really can vary this.  If it is veggie based then probably 3 or 4 cans of beans.  Most of these you'll want to drain, unless they are labeled chili beans.

Somewhere along in here you add some more spice if it doesn't smell right.  And you can add some hot sauce if you aren't making it for Midwesterners.

Then the last ingredient is the tomato paste, using however much you want to thicken it up.  All of this doesn't have to stew for long but the longer it does at a lower temp the better.

Then serve with a a variety of toppings for your family and friends to select from--cheeses, sour cream, fresh onions, hot sauce, avocado.

Making, serving, and eating chili is a true joy.

The last post in this series was about peanut butter and its role in my political history.