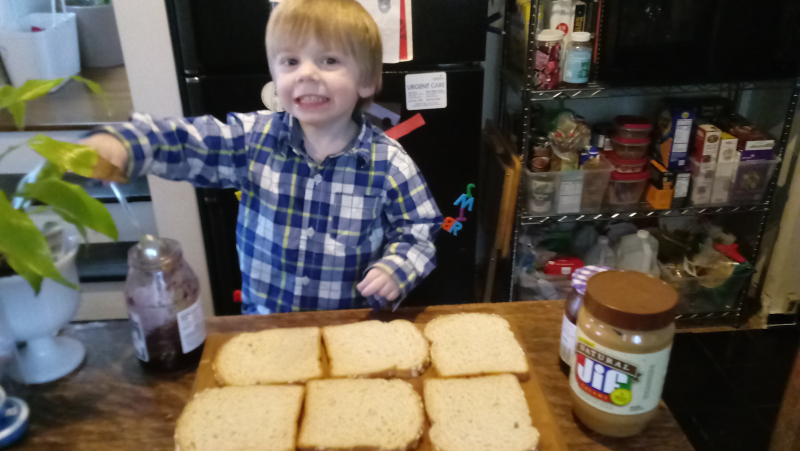 Sebastian fixed dinner for the family for the first time, rather than simply helping.  He made peanut butter and jelly sandwiches.

This most common of children's food (which I've continued to eat all my life) actually plays a role in my very first political activity.

Back during the 1976 presidential election, when I was Sebastian's current age, because I loved peanut butter, I decided to support Jimmy Carter because he was a peanut farmer.  Oh, and I liked his wide grin.  Mom says I also asked questions about him and Ford, which surprised her.

On election night, when he won, I decided I want to throw a victory party and invite the family.  With Mom's help I called all of the family and invited them over for peanut butter and jelly sandwiches the next day.  Then Mom and I made the sandwiches.  None of the family came, as they didn't take the call seriously.  I was deeply disappointed.

Miami, Oklahoma, where I grew up, wasn't far from Diamond, Missouri and the George Washington Carver National Monument.  That was a fun outing because he was known for inventing lots of uses for peanuts.

I have also always enjoyed peanut butter and banana sandwiches and think of them as more of a delicacy.

And a favourite dessert was peanut butter and syrup, which we called "Peanut Butter Baby Food."